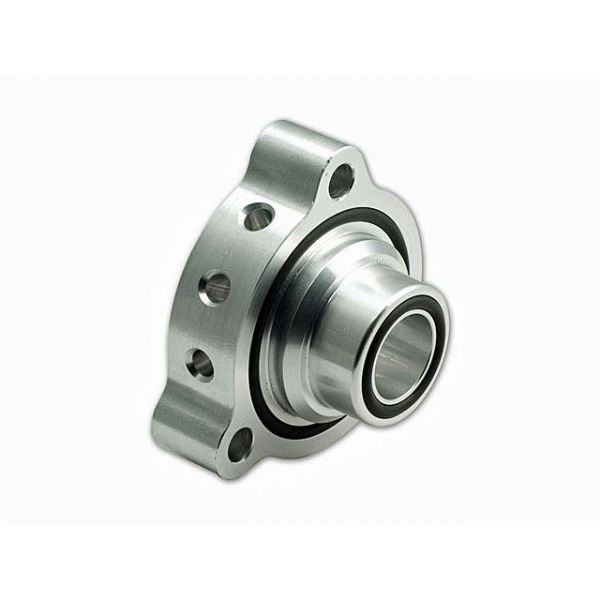 The FMDVMCS is a sandwich type adaptor that fits between the existing electrical solenoid and the turbo charger housing on the BMW Mini Cooper S N14 engines 2007/08(R56/57 *), Peugeot 1.6 turbo engines as found in the 207 and GTI , 307, 308 and Citroen DS3 NOTE * This product is not suitable for the 2008 onwards Cooper S installations, or any car with the N18 engine (THP200)

On these engines, built into the turbocharger housing, is a bypass facility. This allows charge air to be recirculated around the turbo charger from the boost side back to the intake side. This recirculation path is openned and closed by means of an electrical connection from the engine management to a solenoid that is mounted on the turbocharger housing. As you accelerate , the turbo charger vanes are spinning and boost pressure is increased, literally blowing into the engine cylinders. Then when you change gear you take you foot of the accelerator momentarily, select the next gear, and accelerate again. As you take your foot off the accelerator the throttle valve to the engine closes. The problem here is that during this process the turbo is still spinning and the boost pressure that it is producing has no where to go. (This is a bit like putting you hand over a hair dryer so the air cannot get out) What happens at this point is the turbo starts to stall, the spinning vanes slow down (incurring alot of stress) and the boost pressure drops. When you open the throttle valve again by pushing down on the accelerator (demanding more power) the turbo has lost its momentum, boost pressure and there is a pause or a "Lag" before the engine is producing the required power once again. To combat this loss of power and stress on the turbo, a recirculation or diverter valve is used. On the Mini, when the throttle valve closes, the engine management opens the recirculation route around the turbo. This gives the charge air an alternative route and allows the turbocharger to keep spinning so that when you accelerate again there is no "lag" or waiting period. This system works well and is adopted by nearly all vehicle manufacturers on turbo charged petrol engine applications. The only downside to this system is that a turbo chargers produce heat. (The hot air that leaves a turbo is cooled by passing it through an intercooler before it enters the engine. The cooler the air the more power is produced. ) By recirculating the hot air back into the intake side of a turbo the temperatures increase. This is where the Blow Off or Dump valve plays its part. By expelling the charge air to atmosphere rather than recirculating it, you do not increase the intake air temperature but you do allow the turbo to keep spinning. The side effect which is unacceptable to most vehicle manufacturers is the noise of the valve expelling the air. By fitting the FMDVMCS between the existing solenoid and the turbo housing (this involves removing only 3 bolts) the air is re-directed to atmosphere rather than recirculated.

It should be noted that the engine management also uses this valve to decrease engine power when necessary. An example of this is by the (DSC) Dynamic Stability Control system. Although you would not normally hear this occurring, when a blow off adaptor is fitted you may well hear the air being expelled when the DSC operates (going to fast around a bend for example)

In order that you buy the correct valve for your vehicle please refer to the fitment table below before ordering.

This product is available in machined alloy finish only.